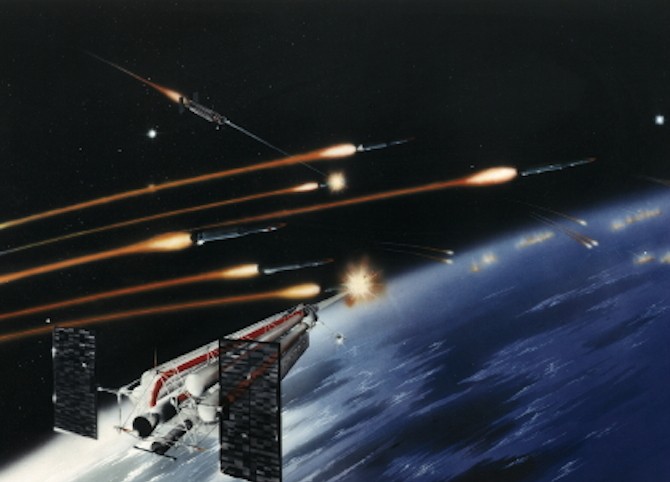 This is an archived article with some very compelling information which may also help explain some of the strange maladies many are experiencing. Watch your thoughts. – Zen

We are dealing with Star Wars. It involves the combination of chemtrails for creating an atmosphere that will support electromagnetic waves, ground-based, electromagnetic field oscillators called gyrotrons, and ionospheric heaters. Particulates make directed energy weapons work better. It has to do with “steady state” and particle density for plasma beam propagation.

They spray barium powders and let it photo-ionize from the ultraviolet light of the sun. Then, they make an aluminum-plasma generated by “zapping” the metal cations that are in the spray with either electromagnetics from HAARP, the gyrotron system on the ground [Ground Wave Emergency Network], or space-based lasers. The barium makes the aluminum-plasma more particulate dense. This means they can make a denser plasma than they normally could from just ionizing the atmosphere or the air.

More density [more particles] means that these particles which are colliding into each other will become more charged because there are more of them present to collide. What are they ultimately trying to do up there — is create charged-particle, plasma beam weapons.
Chemtrails are the medium – GWEN pulse radars, the various HAARPs, and space-based lasers are the method, or more simply:

Chemtrails are the medium — directed energy is the method.

This system appears to be in Russia, Canada, the United States, and all of Europe. Exotic weapons can be mobile, stationary, land-based, aerial, or satellite.

It is an offensive and defensive system against EM attacks and missiles. It uses ionospheric particle shells as defense mechanisms [like a bug-zapper shell]* against missiles and EM attacks. That means they spray and then pump up the spray with electromagnetics. When these shells are created using the oscillating, electromagnetic, gyrotron stations, it “excludes” and displaces the background magnetic field. These shells can be layered one above another in a canopy fashion for extra protection from missiles. The chemtrail sprays have various elements in them like carbon which can used to absorb microwaves. Some of these sprays have metal flakes in them that make aerial craft invisible to radar. Spoofer sprays. Sprays like these can be used to create colorful, magnetized plasmas to cloak fighter jets.

There are satellite weapons involved. Activists are using meters and are getting readings of microwaves, x-rays, and some other kind of emission that they are not sure of, maybe a low-intensity laser.

They are also photographing gas plasma generation due to the heating of chemtrails by electromagnetics. The technical names for vertical and horizontal plasma columns are columnar focal lenses and horizontal drift plasma antennas. Various size of gas plasma orbs are associated with this technology. These orbs can be used as transmitters and receivers because they have great, refractory and optical properties. They also are capable of transmitting digital or analog sound. Barium, in fact, is very refractive — more refractive than glass.

What does that mean? Someone or someones are very involved in unconstitutional, domestic spying and the entrained plasma orbs carried on electromagnetic beams can be used for mind control programming. The satellites can be programmed to track and monitor various frequencies on different parts of your body. These electromagnetic beams carrying the gas plasma orbs stick due magnetic polarity and frequency mapping and tracking to people’s eyes, ears, temples, and private parts. A beam with entrained orbs carries pictures in each orb just like the different frames in a movie. It is a particle beam that is also a frequency weapon.

The satellites download holographic mind control movies, pictures, sounds, and sensations to people through this technology. The Air Force has stated in “Air Force 2025? that their goal is to develop virtual and augmented reality mind control. Depending on the how the computer is programmed or depending on the mood or intent of the person interfacing with the technology, you can be probed, bothered, gaslighted, frightened, manipulated, electronically raped, or tortured. It scans your brain frequencies and deciphers your thoughts. The satellites track you by mapping your bioenergetic signature [body biometrics] and constantly scanning an area to find you.

We are the lab rats for this technology and something is very wrong in the military or intelligence branches somewhere. Because developmental projects in government and military are often so compartmentalized, I suppose someone could be using and developing this technology secretly and without authorization. Then again, behavioral and mind control programs were an authorized policy under MKULTRA. Our country has a history of experimenting on its citizens. We are talking about satellite charged-particle frequency weapons attacking a person 24 hours a day. Psychotronic weapons are considered weapons of mass destruction by the U.N.

“HAARPs” can create earthquakes and can also x-ray the earth to find underground military bases, gold, or oil reserves. These ionospheric heaters can also operate as an over-the-horizon or under-the-ocean communications system. This system can control the weather or create disasters. Taken together with the aurora keyhole through-your-roof satellite surveillance system, Echelon electronic computer/phone sweeps, plasma-cloaked DOD Drug War helicopters and stealths, implants, and cameras on the street, it constitutes one, big global and space control grid.

These weapons involve beams. Two beams overlapped will couple into a particle-ion beam that will bounce off of a remote target and send a holographic image back to the satellite for remote spying operations. When you cross two strong beams, you can supposedly* create scalar energies. These energies can be used as untraceable weapons for nuclear size explosions or for defense. These crossed-energies can be used to cause a person’s physical electrical system to fail or with a lower frequency, administer a kind of remote electro-shock. Visualize touching a positive and negative electric cable to each other on top of your head. Scalar energies can be utilized in hand-held military guns and on tanks. They can dud-out electronics or cause large, electrical blackouts. Scalar energies are practically impossible to shield against. You need lead, ceramics, and a deep underground facility to not be affected by these weapons. Or, you need to be up and above the field of battle.

People who are working on these issues hear tones and hums. If you hear persistent tones and static; have body vibrations, burning sensations, “bangs” to the head, neurological damage, or immune system damage; are hearing electronic voices or hearing the sound of a plasma; suffering from pains deep in your organs or constant headaches; or experiencing other anomalous activity then you may be being targeted by directed energy, mind control weapons. These weapons could be on helicopters, jets, stealth fighters, or on satellites. Directed energy beams and electromagnetic waves can be sent to you via hand-held devices or piggy-backed in on cell phone and satellite towers.

Is it possible that someone(s) are very afraid of coming famines and riots due to the ongoing, man-induced failure of the ecological system, and they are saturating the earth with chemtrails for large- scale, gas plasma mind control? Is this the last grasp for the world’s resources? Or, are they just control freaks and money mongers? Someone would like to get to that oil under the melting [due to chemtrail-trapped EM heat] Artic. And, I guess the Third World is not a part of this system. I don’t think that the developed nations are going to let them in on this either.

Any country that joins this NATO system will become mind-controlled and diseased due to the associated, intense, oscillating, electromagnetic fields, electromagnetic soup, and the poisonous, toxic chemtrails. Our DNA will break. We risk the earth’s spin and tilt becoming messed up due to mucking around with the magnetic fields through this military technology. Maybe, it is already messed up.

It constitutes U.S. global domination via NATO and the erosion of civil rights. According to Charlotte Iserbyt and Al Martin, there are ex-KGB and ex-STASI advising our new Office of Total Information Awareness. They are the ones creating our new internal passports [national ID]. And under “The Treaty on Open Skies,” we have overflights by Russian and German military. Who exactly is flying those plasma-cloaked craft that are seen all over this country and mistaken for UFOs by people who do not know about this aerial deception technology? Obviously, we have another “Project Paperclip” in the making. We can add the new thugs to the 2,000 Iraqi brought into country by Daddy Bush who are now living in Nebraska.

The elitist corporate government is going to hold the rest of us hostage with directed energy weapons in space, if the Policy for a New American Century group – PNAC – Bush and cronie think tank has their way, along with directed energy attacks against any country or citizen that they decide they do not like. These weapons can create climate war, weather war, mind war, cyber war, disease war, disaster war, and undetectable war. Taken together they can create economic war.

If this system is not stopped, it will kill billions due to aluminum and barium poisoning. It will kill billions due to crop failures and world-wide famine. It will cause heart attacks, strokes, and cancers. It will cause stillbirths, miscarriages, and infertility. The chemtrail sprays often have fungi, bacteria, viruses, dessicated red blood cells, crystalline substances, carbon, metal cations, lithium, other chemicals, heavy metals, and God knows what – probably smart dust, or nanocrap. Years of biowarfare testing on the American public is no big secret anymore. Spraying germs in the sky where they mutate due to the ultra-violet light — brillant plan, my man. Are we acceptable losses or is this by design?

12NextView as Single Page
Continued on Next Page
source: http://beforeitsnews.com/alternative/2014/04/the-true-purpose-of-chemtrails-2948294.html