Earliest History records a Spanish land grant to George Murray in 1804; this grant of land included what is now known as the Packwood Place, where Seth and Ester Clinton run a famous oyster house, where groups of people go for oyster roasts. Frank Packwood was one of the earliest settlers, others being E.A. Marsh, A.A. Berry who was the first Postmaster in its infancy before W.C. Howse. The very first one was Seagrave Adams before postal systems started.

This land grant was believed to be the first grant in Oak Hill before the incorporation of the City. People got grants of thousands of acres all down the East Coast. Later, people bought land in much smaller pieces.

Soon after the war of 1812, for three generations, the Swift brothers came in a Schooner – cutting, shaping, and taking out live oak and cedar on government contracts for shipbuilding with their crews of as many as 500 men and needed supplies. Arriving about November 1st, when danger of yellow fever was past, and leaving about May. 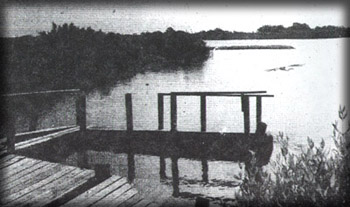 Many from the Audubon Society visited the Halifax (Indian now) River in 1831-32. It was first Hillsboro River, then Halifax, and now Indian River. Why the names were changed isn’t known.

Mr. James Rideout came in 1874 on the advice of Henry Ward Beecher. He built a house and planted an orange grove. Rideout became a County Commissioner in 1874; also, his sister married Henry S. Parker and they operated a boarding house here for many years.

In the Atlantic House, built by Henry J. Faulkner from New York, and Mr. McMurry, was the second one in the county in October 1883 to be licensed to sell spirituous liquors. In the wintertime, fishermen and hunters filed in and Mr. Frank Sams, who operated it, saw that they had the best saddle horses and dogs for hunting.

Each of the following had bee hives here in 1887: Marsh, Cunningham, Clinton, Adams, Howes and Fountain.

A Congregationalist minister, as pastor, named Rev. Mr. Wicks, also had a public school with nine pupils. The same building is located at the N.W. corner of Lagoon and Howe Streets.

Other townspeople were the Honorable H.C. Adams, assemblyman from Volusia County, Mr. A.A. Berry, Postmaster, Mr. L. Allen from Boston, Mr. A.Q. Goodrich from Philadelphia, with four sons and two daughters, a Mr. Holden from Swampscott, Massachusetts. Several families from Texas settled in Oak Hill in 1886 and became interested in orange groves. One of these was John P. Putnam, father of the Honorable Howard G. Putnam, who was a Representative, then a Senator from Volusia County.

The English gave up Florida to the Spanish and all the settlers left and went to the West Indies. Halifax area reverted back to the wild woods. The Spanish invited them back and gave them land grants in the years, beginning in 1800, in the Volusia section – one was Mr. McHardy, the first settler in Oak Hill. The McHardy property was sold to the Lawtons of Charleston, then to the Darbys, being exchanged for the Mount Oswald tract. In 1815, C.E. McHardy was granted a tract of 1100 acres on the Hillsboro River (now known as the Indian River). Mr. McHardy had a large house about four miles down the Indian River and had a caretaker by the name of Will Allen.

Where LeFils Fish Camp is now was once a big hotel built by Mr. McMurray and Mr. H.J. Faulkner, run by Captain Frank Sams, but it didn’t last long as it burned. They built a big swimming pool, water being from an artesian well. There were lots of fig trees there also, Mr. Sams then moved to New Smyrna. When they moved the county seat to DeLand from Enterprise, Mr. J.H. Faulkner became clerk on April 3, 1888. He was also appointed as one of the three chosen to procure buildings at the new county seat for the safekeeping of the county records. The citizens at Enterprise did not give up without a fight to have the county seat moved. Suits were brought to stop it, but the Supreme Court of Florida decided for them all, and on June 8, 1888, DeLand was chosen for the county seat; H.J. Faulkner was chosen clerk of the Circuit Court, and was to superintend all records removed to DeLand.

On July 16, 1845, the Governor signed a bill changing the county seat of Orange County to Mellonsville from Enterprise. The Governor authorized Captain Aaron Jernigan to form a company to protect the frontier and keep watch over the country. When any trouble arose, they were called on to help out. By 1851, the Indians became wary of being captured, since a few had been, and they retreated deeper in the swamps and the company, having nothing to do, disbanded. Some Indians still live in the Everglades. To this day, they are living in peace with their white neighbors. They are the Seminoles. This company was called on to help here in Oak Hill, December 1856; and although disbanded, they came. The Court House at Mellonsville burned about 1849 destroying all records. Volusia County used to be Orange County until December 29, 1854, when Volusia was incorporated. By a special legislative Act, passed and approved by the Governor on December 19, 1859, a line dividing Orange and Volusia Counties was formed. They moved the county seat to DeLand, June 8, 1888, and the Court House was built in 1895.

W. C. Howse started the first settlement here on the land on the river where E.A. Smith owns north of Snyder Hill. He had a general store and the mail first came in at that point. Later he built a store here the Post Office is now on East Halifax Avenue. Mr. Seagrave Adams, married to Jennie B. Berry, was the first Postmaster then where the mail was brought here by sailboat from Titusville. Mr. Adams lived in a house where Snyder Hill is now. Mr. W.C. Howse was Postmaster from 1894-1903. At one time, there was a walking mailman. He walked along the water’s edge and at times, he had to swim. He came here in about the 1850s. E.A. Smith bought the property still owned by his widow, Eunice Cone Smith. He owned another piece before World War I and while he was away in service, someone beat him out of it, like others here were done. He bought the piece his widow now has in about 1943. 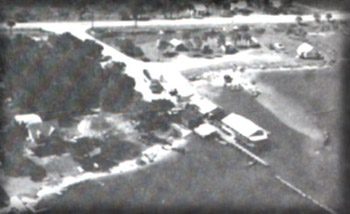 E.A. Smiths, aerial photo. This was where the first Post office and General Store were begun on this river shore by Snyder’s Hill.