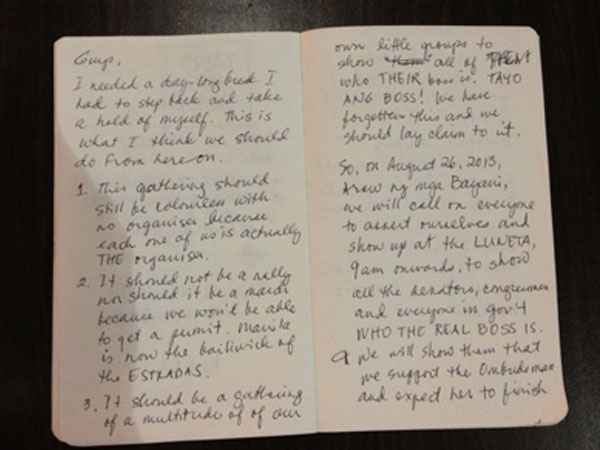 SERIOUS CALL A page from the diary of Peachy Rallonza-Bretaña. CONTRIBUTED PHOTO
MANILA, Philippines–Since the controversy surrounding the alleged P10-billion pork barrel scam broke out, there has been a torrent of articles and photos that have linked the now fugitive Janet Lim-Napoles to several legislators. Most of the articles—which first came out in the Philippine Daily Inquirer—allege that Napoles put up a number of non-government organizations or NGOs that accept financial allocations from certain legislators’ Priority Development Assistance Fund (PDAF) for projects. The NGOs turned out to be fake, with Napoles and the legislators themselves said to have pocketed the money.

Napoles’ daughter Jeane has figured in micro-blogs and even an Instagram account documenting her high and lavish lifestyle in captioned photos (showing trips to Europe, her outfits-of-the-day, and even a Porsche as a surprise graduation gift from her folks), making her the poster girl of this alleged scam.

With each exposé, thousands of people have vented their anger through social media. Everyone’s timeline would show a link, an acerbic status post, and some excerpts from the recent Commission on Audit (COA) report on the PDAF allocations. Just like the steady wave of stories on Napoles, other angles have been coming to light. All of them, however, remain allegations. 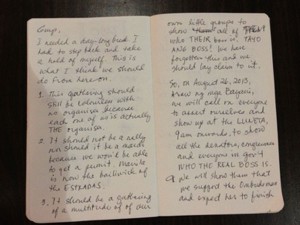 Many of us got tagged onto a status post, an invite to “go to Luneta on August 26, National Heroes Day, to show our protest” against the pork barrel system. A Facebook page on this “million people march” has been put up to tell the people in power that we’ve had enough—the common sentiment being a call to “get to the bottom of this scam, probe, charge, prosecute whoever is involved, and eventually abolish the PDAF.”

Since there was no recognizable group making “the call”—the usual noisy suspects have been silent—people started asking and doubting the agenda of the gathering. “Who’s organizing this?” echoed through Twitter and Facebook. Many were afraid that it was a set-up. A lot were wary of being associated with this or that collective from the broad spectrum of Philippine political leanings.

Last night, I was having a highly charged discussion during a meal with friends when a lady in red showed up, identifying herself as Peachy Rallonza-Bretaña (apparently we have a common friend). According to Peachy, she was the one who first re-posted the call to go to Luneta by Ito Rapadas, former lead singer of the band Neocolors and now a record producer.

Peachy added that she was also the first to post “the call to action” and was likewise the one who put the time and place of the gathering—which spread on Facebook via tags and links.

As a result, Bernardo Bernardo and Monet Silvestre (a stage actor and a musician, respectively) reposted a suggestion to put up a Facebook page with a California-based Filipino-American TV show called “Power ng Pinoy.”

Peachy said she was tagged as a “host” on the event page, made administrator, and identified as being the spearhead of this Aug. 26 protest.

So, I asked her, “Well, are you the organizer? There have been questions, you see. Is there a program? A permit? What can we expect? Who will be beside me if I go?”

She looked a little beat, and a lot overwhelmed, so I stopped to let her speak.

I learned that Peachy has no affiliation with any political group or movement. She did not look sinister—in fact, she was quite reserved. I didn’t see an agenda-filled demagogue. All I saw was a taxpayer who is very upset at what is happening. She is angry and is just inviting people to gather, essentially asking them if they are angry, too.

“Luneta is a public space,” she said. “This is just an invitation on Aug.  26, National Heroes Day, to go to Luneta, and stake their claim on a little piece of our national historic park.”

The broad idea of the gathering is this: probe and prosecute those who are found guilty of scamming taxpayers’ money through the P10 billion pork barrel scam. I imagine many people will go for many other reasons. Some will call for the abolition of the PDAF all together. Perhaps, further down the road, some groups will be pushing for a Freedom of Information Act, which would act as a deterrent against these shady deals.

I suppose, since it appears that there is really no single individual or group organizer behind this—save for this cropped haired, now-nervous lady in red—then you must go for your own reasons. If you decide to go, then you organize yourself to go. This may sound naive, weak even to the more seasoned street protesters, but it is certainly a voice that is growing and cannot be ignored, not by those in power and certainly not by anyone who sincerely wants a better way of doing things.

Go if you want to. For as long as you have sound reasons for deciding, well and good. The important thing is that you made a decision.

*The author is the founder of Rock Ed Philippines and the communications director of Change.org in the Philippines.*