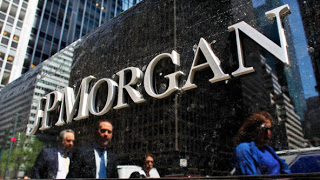 Thanks to Les! -Bill
The Real Risk at JPMorgan Isn’t Its Legal Mess
By SUZANNE MCGEE, The Fiscal Times
August 20, 2013
http://www.thefiscaltimes.com/Columns/2013/08/20/The-Real-Risk-at-JPMorgan-Chase.aspx
Remember that scene in Casablanca when Claude Rains, playing Captain Renault in the World War II-era city of the title, closing down Rick’s casino with the immortal words, “I’m shocked, shocked to find that gambling is going on in here,” even as he gratefully pockets his own winnings?

Well, welcome to the Wall Street circa 2013. JPMorgan Chase (NYSE: JPM) seems to be mired in a perfect regulatory storm, with some of its European traders facing criminal charges in connection with the London Whale losses, its commodities operations still faced with uncertainty as its aluminum warehouse storage “scandal” continues, and now the “revelation” that the bank hired the children of top Chinese officials in hopes that this would help it win more business. (It may even have worked – surprise, surprise. Odds are, though, that the nepotism scandal will prove to be a non-starter on the regulatory front: Once that can of worms is opened, it’s hard to imagine where it will ever end.)

In all, The Wall Street Journal notes, the bank faces as least seven investigations by various regulators. Yet while the bank says its legal woes might – in the worst case scenario – add $6.8 billion in losses above its existing reserves, this isn’t in and of itself a reason to flee the stock.
Set those possible losses against the bank’s earnings performance, its valuation (only 8.6 times trailing earnings), its lavish 2.93 percent dividend yield (almost enough to put it into the Dogs of the Dow category). Then factor in that short positions by traders hoping to profit from a fall in the bank’s share price have declined by nearly 5 percent lately, and still account for only about 1 percent of all shares outstanding, and you have a recipe for a rapid rebound.

What will trigger that? Who knows. But the odds certainly favor it, once the headline risks abate.

In his letter to shareholders earlier this year, CEO Jamie Dimon wrote that the bank “must and will do a better job at compliance.”

“Let me be perfectly clear,” Dimon wrote. “These problems were our fault, and it is our job to fix them. In fact, I feel terrible that we let our regulators down. We are devoted to ensuring that our systems, practices, controls, technology and, above all, culture meet the highest standards. We want to be considered one of the best banks – across all measures – by our shareholders, our customers and our regulators.”

Any further revelations of questionable losses or trading activity and the context in which investors view JPMorgan Chase will turn much darker – and rightfully so. Once is a bad error of judgment; twice is unforgivable.

But most of the risks that we know the bank will face – rising interest rates, a decline in mortgage refinancing, the need to satisfy regulators on both capital plans and an emergency liquidation strategy – are common to all banks. What all banks don’t share is JPMorgan Chase’s dominant market position and the intense focus of its management team.

If you want to stay away from this stock, do so because it is mismanaging its business, failing to maximize returns or dropping the ball on risk management – not because of headlines about litigation. Unless JPMorgan Chase has been manipulating global markets on a massive scale (of the kind I’ve only encountered in crime fiction), then the ongoing litigation might leave a slight but not lasting tarnish on its name that time will rapidly remove.

Posted by Americani Kabuki at 2:46 PM