Evidence points to aboriginal populations at least as early as 2000  BC. Centuries of oyster feasts contributed to an estimated 33,000 cubic  yards of shells covering 2 acres and about 50 feet high at famous Turtle Mound (8 miles south on A1A). It is the largest, but only one of many. By 1769 Dr. Andrew Turnbull, a Scot, had recruited 200 Greeks, 110 Italians and 1190 Minorcans to homestead his royal land grant of 101,000 acres. He named the colony “New Smyrna.” Shortages, mosquitoes and disease led to the failure of that colony ten years later. Turnbull had even started his “palace” on yet another shell mound but only got as far as the “coquina” block foundation. “Coquina”, composed of millions of fused together tiny shells was the Florida coastal building material of choice in those days. You can still see the foundation at the corner of Julia and North Riverside Drive today.

The Spanish regained control by swapping the Bahamas for Florida in 1783 and then sold it to the new United States in 1819. Depredations of the wars of 1812 and Seminole in 1835 destroyed whatever was developed. An “elegant” hotel built on the original Turnbull foundation was shelled to oblivion by Union sailors. After the Civil War the hotelier Sheldon rebuilt his hotel which served as the local “shopping center” until 1896. Throughout the 1800’s military necessity caused the building of several roads; one from St. Augustine to the New Smyrna stone wharf and later two from Forth Mellon on Lake Monroe. With the Civil War behind them railroad and steamboat transportation spurred development. 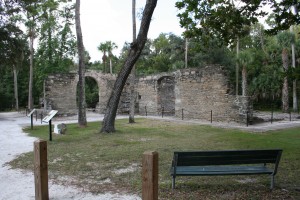 As early as 1835 settler Kemble, Depeyster and Cruger from New York built a sugar mill to process the cane of nearby plantations. The mill ruins are preserved for viewing today just off Route 44 and Old Mission Road. In March of 1887 the Blue Spring, Orange City and Atlantic Railroad reached New Smyrna and steady growth began in 1892. A wooden bridge connected the peninsula with the mainland and it became a regular vacation spot for Orlando, Deland and Enterprise families. Between 1900 and 1920 the town grew 400% with 4 churches and many businesses. It was incorporated as a city in 1903.

The 20’s were rough on the local orange groves and after the stock market crash of 1929 almost 1/4 of all Floridians were on relief. The war years with limited travel gave way to unprecedented development both in small beach side developments and high rise towers. New Smyrna’s more quiet family approach was an alternative to Daytona’s glitter and crowds.

Turtle Mound and the southern end of A1A became part of the Canaveral National Seashore Park and New Smyrna’s downtown underwent tasteful renewal. A soaring south causeway bridge and a higher north causeway “draw” all but eliminated the beach traffic bottlenecks. Tight control of beach traffic and protection of nesting sea turtles helps maintain the naturalness of the beautiful beach. Along A1A, Route 44 West and U.S.1, shopping centers serve about every commercial need and New Smyrna’s many festivals, galleries and theater serve the spirit.

Atlantic Center for the Arts, located just north of the municipal airport, is a resident community for all discipline with meeting and gallery space and in a pristine setting. Bert Fish Medical Center, recently expanded, is surrounded by medical offices and clinics of every description. Marinas along the north causeway and downtown, park and boat ramp access to the river and scores of fine dining spots make New Smyrna a prime destination.